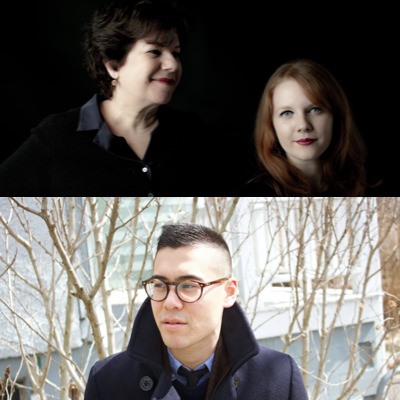 Ginette Michaud and Alice Michaud-Lapointe (top) and Michael Prior (bottom)

Author Alice Michaud-Lapointe was born in Montréal in 1990. In 2014, she published Titre de transport with Héliotrope, which was a finalist for the finaliste au Grand Prix littéraire Archambault and was rereleased in paperback in 2016; Villégiature (2016); and Néons et sakuras (2018), co-written with Ginette Michaud. She is also a PhD student and a graduate teaching assistance at the Université de Montréal’s cinema studies department. Since 2014, she has sat on the writing committee for cultural magazine Spirale. Her work has been published in various magazines, including 24 images, Études Françaises, Found Footage Magazine, Nouvelles Vues and Hors Champ.

A Professor Emeritus at the Université de Montréal’s French-language literature Department, Ginette Michaud has written many essays (on Barthes, Ferron, Derrida, Blanchot and Cixous), which have earned her several distinctions (AFCAS Adrien-Pouliot, Eva-Le-Grand and Victor Barbeau awards). As a member of the international committee for editing Derrida lectures, she coedited the The Beast and the Sovereign and Le parjure et le pardon, as well as his writings on the arts and architecture. Her latest published works are La vérité à l’épreuve du pardon and Lire dans la nuit (Les Presses de l’Université de Montréal, 2019 and 2020).

Michael Prior for his book Burning Province

Michael Prior’s poems have appeared in numerous magazines and anthologies, including Poetry, The New Republic, Narrative Magazine, PN Review, The Next Wave, Resisting Canada, and the Academy of American Poets' Poem-A-Day series. His first book of poems, Model Disciple (Véhicule Press), was published in 2016 and was named one of the best books of the year by the CBC. His second book, Burning Province (McClelland & Stewart), was published in Spring 2020. He divides his time between British Columbia and Minnesota, where he teaches at Macalester College.

Learn more about Michael Prior.

The Canada-Japan Literary Awards recognize literary excellence by Canadian writers and translators who write, or translate from Japanese into English or French, a work on Japan, on Japanese themes or on themes that promote mutual understanding between Japan and Canada.

Who created this prize?

Funding for the Canada-Japan Literary Awards comes from the investment returns on the portion of the Japan-Canada Fund set aside as a perpetual endowment for a literary award.

Updated guidelines will be posted 2 months prior to the deadline.

For people who are Deaf, hard of hearing, or TTY users, please use your preferred MRS (Message Relay Service) or IP service to contact us.