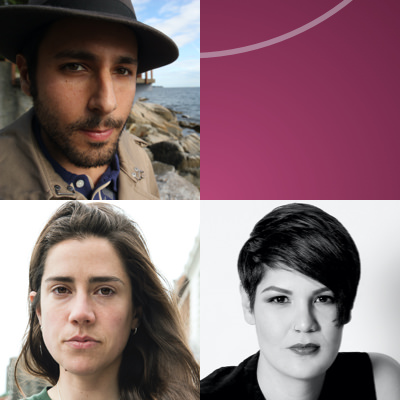 Carmen Papalia uses organizing strategies and improvisation to address his access to public space, art institutions and visual culture. His work, which takes forms ranging from collaborative performance to public intervention, is a response to the barriers and biases of systems that enforce ableist concepts of normalcy and standards rooted in Western medical tradition. As a convener, he establishes welcoming spaces where those from historically marginalized groups realize their desires for participation through processes rooted in activism, performance and institutional critique.

Papalia’s work has been featured at the Solomon R. Guggenheim Museum (New York), Tate Liverpool, the Banff Centre for Arts and Creativity, and Gallery Gachet (Vancouver), among others.

Tara Williamson is an Anishinaabe/Nehiyaw singer/songwriter from Manitoba. Her first full-length album, Songs to Keep Us Warm (produced by Jim Bryson), was nominated for Best Pop Album at the 2017 Indigenous Music Awards.

Williamson’s first 2 EPs—Lie Low (produced by James McKenty) and ndn summer (produced by Kinnie Starr)—continue to receive attention and airplay across Turtle Island and internationally. Her sophomore album, Enough (produced by Justin Delorme), will be released in the spring of 2021.

Tara is also a professional educator, writer and researcher and holds degrees in social work, law, and Indigenous governance.

The Joseph S. Stauffer Prizes are awarded to emerging and mid-career (less than 15 years of practice) Canadian artists who exhibit strong artistic potential in music, visual arts and literature.

Professional emerging and mid-career (less than 15 years of practice) Canadian artists who exhibit strong artistic potential in music, visual arts and literature, who submit an eligible application to the Explore and Create program, are automatically considered for this prize. The winners are selected based on the assessment of their grant application.

These prizes are awarded to honour the memory of Joseph S. Stauffer, whose bequest enabled the Canada Council to encourage young Canadians of outstanding promise or potential.