Neworld Theatre Experiments with an Australian Model of Artistic Creation 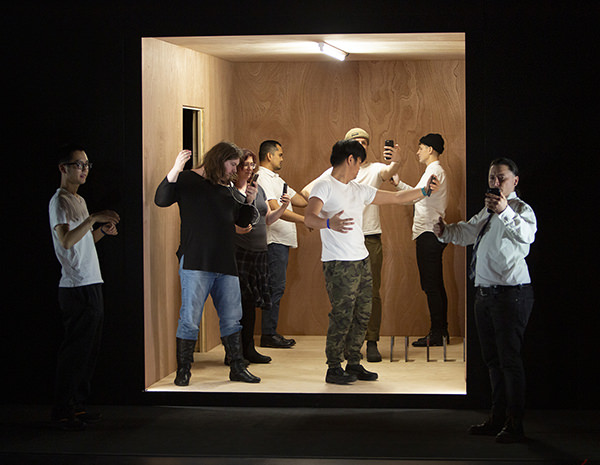 THE DEMOCRATIC SET, with members of Building Caring Communities; co-produced by Neworld Theatre and Back to Back Theatre. Photo: Tim Matheson

A co-production between a Vancouver theatre and an Australian counterpart brings together people with and without disabilities.

Fresh inspiration from an international partnership

“The Democratic Set” is an approach to artistic creation designed by Back to Back Theatre in Victoria, Australia. Vancouver-based Neworld Theatre collaborated with the Australian theatre on an experimental project. During a five-day residency, participants both with and without disabilities expressed themselves on a topic of their choice. They made brief appearances on a theatre stage in a box called “The Set,” where everyone could take part, including audience members. The participants’ contributions were recorded for a film that was subsequently presented at the PuSh Festival in Vancouver in January 2020. This collaboration with the Australian group demonstrates the tremendous potential of international partnerships in theatre.

Equity as a driver of artistic creation

This project is based on the principle that all human beings are equal and should enjoy the same rights and opportunities. The residency involved members of the Vancouver communities that the theatre works with, such as the Rare Disease Foundation and the Frog Hollow Neighbourhood House. Every project participant had an opportunity to express themselves and share their vision of democracy, with the resulting film giving them even more visibility.