Jean-Baptiste Vuillaume of Paris—one of the best luthiers of his era—made this violin. The violin bears the master's signature on the upper back as well as his number and brand stamp, markings which indicate the maker’s highest level of quality. The violin is in near mint condition and is an exact copy of the famed 1716 Antonio Stradivari, known as the “Messiah” or “Messie,” that Vuillaume brought out of Italy after the death of its owner, Luigi Tarisio, in 1854. The previous owner acquired the violin from the renowned shop of Jacques Français, Rare Violins, in New York in the 1970s. Français had brought the violin to America after having discovered it in France, where it had been in a vault for eighty years. Français attributed the violin’s exceptional condition in part to its long period of internment. More recently, in 2001, it was rescued from a house fire in which the owner lost all other personal belongings.

The instrument has a two-piece back of exceptional maple and displays a strong figure throughout. The ribs and scroll are of matching materials, and the maker of the violin has blackened the chamfers of the scroll. The two-piece top of select spruce, displays medium width straight grain, widening somewhat at the flanks. The maker has slightly antiqued the varnish of reddish brown over a golden ground, which displays a lovely orange peel texture.

The violin bears the master's signature on the inside upper back, as well as his number and brand stamp.

Donor: Purchased by the Canada Council for the Arts with funds from the Edith Davis Webb Endowment
Acquired: 2012
Value: $280,000 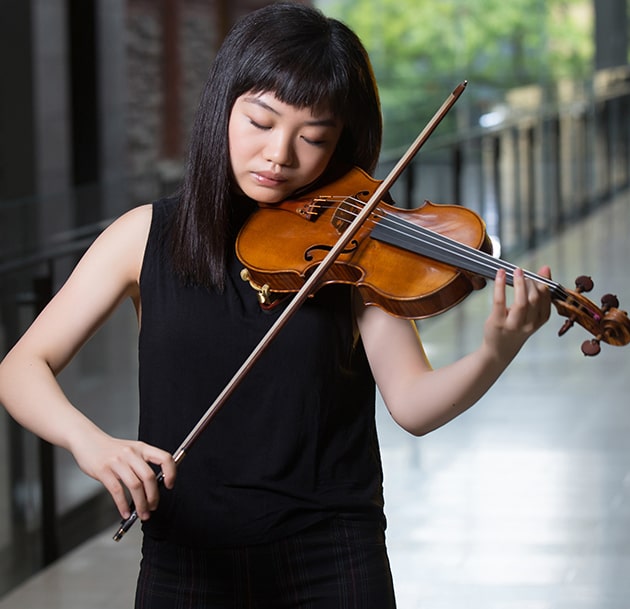